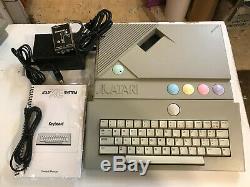 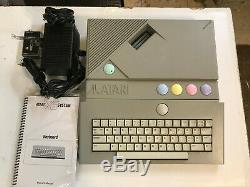 "Atari XE Video Game Machine(XEGM)" removed from an Atari XE Game System(XEGS)/64K 8-Bit Computer. Used in like new A condition. The Joystick, Light Gun, Bug Hunt and Flight Simulator talked about in the review and included in the GAME SYSTEM are not included. Styrofoam packing and original box are.

The Photo is a file Photo and is not the system you will get but shows the XEGM. 64K XE VIDEO GAME MACHINE. Picture is file photo and is NOT what you will receive.

We have several of these are do not have time to take pictures of each one. That are in excellent condition and are NOT yellowed or damaged. We bought these direct from Atari when they closed Atari Mexico. NOT INCLUDED: The Joystick, Light Gun, Bug Hunt and Flight Simulator talked about in the review are not included.

Also the original box and packing are not included. Terminology is oftem misused with the XE Computer. The XE Game Machine is the computer included in the Game System. The Game System also included a Joystick, Light Gun, Flight Simulator and Bug Hunt. The XEGM is the 64K Computer and Keyboard. The XEGS is the complete Package with Joystick, Light Gun and extra Software. The Atari XE Game System is everything the sophisticated game player needs in one box. The XE includes the same chip set and 64K random access memory (RAM) as the Atari 800XL and 65XE so it can run thousands of programs and produce exciting animated graphics. Contained in a compact console that is easily connected to any color television or composite monitor, the XE comes with a joystick and a light gun for fast-action arcade-style and shooting games, and a detachable alpha- numeric keyboard. On top of the console is a game cartridge slot and five pastel colored buttons for various system functions. Three games are included in the XE package: Missile Command , an arcade classic; Bug Hunt , a cute light gun shooting game;, and Flight Simulator II , SubLogic's sophisticated, accurate simulation that takes advantage of the keyboard as it puts you at the controls of a Piper Archer II. In addition to the flight simulation, the cartridge includes WWI Ace , a game in which the plane is equipped with bombs, machine guns, and a radar screen so you can take on computer-controlled enemy aircraft. Perhaps the most important thing for Atarians to know about the XE system is that inside that sleek case it is identical to an Atari 65XE 8-bit computer. Why is that so important?

So an enormous library of sports games, adventure games, strategy games, and arcade classics is available for the XE. And when a disk drive is added that library swells by not tens, not hundreds, but thousands of entertainment packages. Even if the count is limited to cartridge games, the number of games available for the XE is several times the number available for competing systems. As a bonus, the XE game system also contains the Basic programming language in its permanent read-only memory (ROM) so you can write programs of your own. Adding an optional XE disk drive not only allows the XE to run sophisticated disk-based games, but also educational and productivity software.

And by adding a printer and/ or modem, you can move on to word processing, spreadsheets, telecommunications, and many other useful applications. The XE Game System has it all: powerful performance, great graphics, extensive game library, future expendability, and economical price. It's another Atari breakthrough! The item "XE Video Game Machine(XEGM) Orig Atari 64K RAM Computer A NOT SYSTEM Global Ship" is in sale since Tuesday, October 10, 2017. This item is in the category "Computers/Tablets & Networking\Vintage Computing\Vintage Computers & Mainframes".